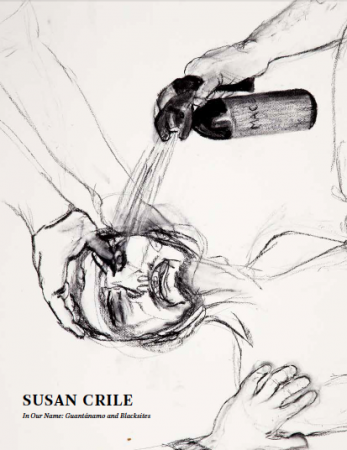 This interview took place on December 11, 2016, before the inauguration of Donald J.Trump as President of the United States. On January 25, 2017, in his televised interview with anchor David Muir on ABC’s “World News Tonight,” Donald Trump made the following claim about waterboarding: “But do I feel it works? Absolutely I feel it works.” Plans to re-establish detention facilities outside the United States, i.e. “black sites” can be found in the “Draft Executive Order on Detention and Interrogation.” —Liz Frank

Elizabeth Frank: Can you describe the history of this series—how you came to do it? Susan Crile: Photos of prisoners at the Abu Ghraib prison in Iraq, who were sexually abused, humiliated, tortured, and in some instances tortured to death, surfaced on the Internet in late 2003. That slip through the well-guarded wall of secrecy and silence revealed the dark side of our national security apparatus.

Blatant and systematic torture was not an isolated incident, but a policy carried out at many locations outside the U.S, including our base at Guantánamo Bay, on land leased from Cuba, and at “black site” prisons overseas, where U.S. personnel oversaw “enhanced interrogations.” Torture is illegal by U.S. law and internationally by the Geneva Convention. Yet, the Department of Justice found ways to circumvent the law in order to make torture legal as long as it wasn’t on U.S. soil. These crimes, in our name, in the name of the American People, have a great deal to do with my making this art. Guantánamo and Black Sites is the second part of what will be a three-part series of works on paper. The first part was Abu Ghraib (2005-2007). The second is this current series, Guantánamo and Black Sites (2010–2016). The
third will be on the U.S. prison system, because it all starts at home. EF: Do you consider your art political?

Susan Crile: Yes, but there’s always the risk when you’re making art with political content that it can become too descriptive, too literal, too on the nose. Then it becomes illustration. I try to find that line where imagery connects to feeling and becomes metaphoric. Beneath it all, my work is about humanity. My work is also about torture, what man does to man, what it is to experience extreme pain. It is about how we respond to injustice; about understanding what it is to destroy the humanity of others to create extreme pain in another person.Whether they’ve done wrong or have not done wrong, nothing justifies torture.